Want to feel good about taking your shoes off any time? You can. No more unpleasantly smelly, sweaty feet – fresh feet all year round!

About - All you need to know about sweaty feet

How come my feet smell?

Feet can sweat, and consequently develop an unpleasant odour.
Nothing to be ashamed of!
As every foot sweats and is mostly trapped inside socks and shoes, this is only natural. It is the interaction of these two factors along with bacteria that causes the occurrence of unpleasant smell. Feet do have more sweat glands than any other part of the body (about 500 per square centimetre). Sweat as such does not smell, but being enclosed in socks and shoes, microorganisms find ideal circumstances to thrive in the warm and humid climate. The products of their metabolism consequently cause the unpleasant odour. Fast relief from sweat and smell

A discretely freshly scented foot spray will see you through hot and humid times: Hansaplast offers two solutions, depending on your needs. Both can be used daily as they are dermatologically tested and designed to be skin-friendly.

Hansapalst Athlete’s Foot Protection 2 in 1 Deo is a highly reliable deodorant with the active ingredient Octenidine. Apply the spray after yourbath or shower to prevent the formation of athlete’s foot and to give your feet a fresh sensation all day long. If you tend to sweat a lot, try Hansaplast Silver Active. This new, highly effective antiperspirant will provide 48 hour safe protection against foot odour and protect reliably against sweat. The antiperspirant works through its well-known active aluminium chloride hexahydrate. But it also contains actual silver ions that go to work against foot odour with their antibacterial complex and highly active effect. Hansaplast Silver Active‘s antibacterial power will also prevent athlete‘s foot at the same time. “Here’s how the new, highly effective technology works: Odour-producing bacteria are regarded as one of the main factors causing body and especially foot odour, and that’s where Hansaplast Silver Active goes to work. Odour is imminent as soon as fresh sweat, which is odourless at first, is decomposed by bacteria.

„Keeping foot odour
at bay means getting
rid of the bacteria
that produce it.“

Silver Active prevents this from happening. It does so by means of silver technology. The active antibacterial complex with silver ions contained in this latest generation deodorant are effective even in small concentration against bacteria: they destroy the bacteria’s cell membranes, affect their metabolisms, and influence the DNA’s genetic information, so the bacteria are reduced and further growth prevented. Unpleasant foot odour is thus prevented from occurring. It doesn’t irritate skin as it contains no alcohol and is dermatologically tested.” 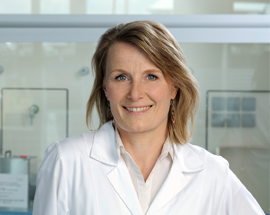 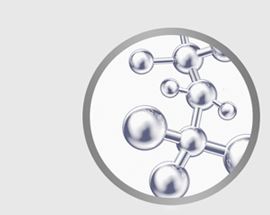 Active against bacteria: silver ions
Back to top

Use on one of these effective and skin-friendly sprays to help your feet stay dry and fresh. 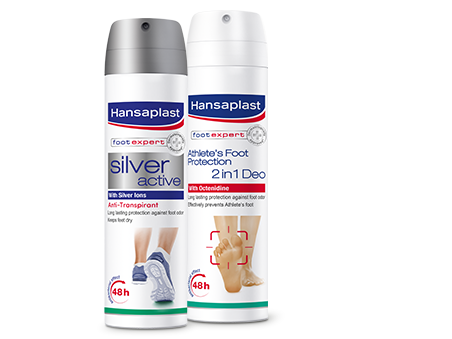 Prevention - Smart ways to do it better

It is relatively easy to control most cases of smelly feet.
Here are five easy-to-follow tips:
Back to top

For further information regarding Hansaplast products, please contact us via email on phc@beiersdorf.com. Please note that none of the above given tips or recommendations substitute medical advice. Carefully read the instructions for use given in our products‘ packages. Consult a health professional if our tips won‘t help or in case you have or suspect a medical condition.

Find out how to reliably protect your feet from sweat, athlete’s foot and get 48-hour extra-safe odour protection 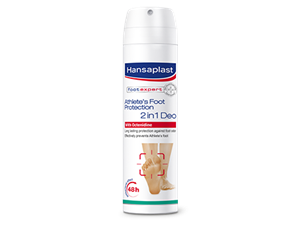 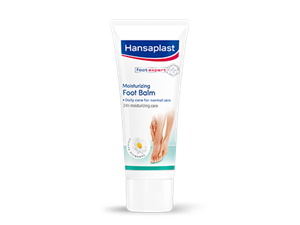 Find out how to moisturise and soften your feet as part of your daily care routine
Always see a doctor if the wound is deep, bleeds heavily or shows signs of infection like reddening, swelling or warmth. Please note that, although they were compiled with great care, the tips and advice given on this website by no means substitute medical advice and treatment. If you have or suspect a health problem, consult a doctor and follow medical advice, regardless of what you have learned on this website. Always read carefully and follow the instructions for use or the leaflets of our products.
For further information, please contact us via email at Hansaplast@Beiersdorf.com